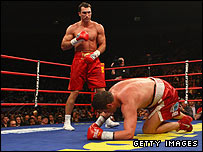 The fight was fully under the control of Wladimir. He did not finish it with knock-out, but showed total "ownership" of the ring.

The Klitschko-Ibragimov fight was the first heavyweight unification since Holyfield-Lewis in 1999.

The Klitschko brothers are not just good boxers, punchers, real fighters. They are probably the most intelligent boxers of all times and all around the world. They never "black mouth", they respect their rivals, they respect people. And they are respected as well.

I am very proud of Wladimir who is a good sample of intelligence, strength, respect.

Whether you need to run your side hustle or you are working in an enterprise environment, you probably want to deploy and maintain the applications and services using Infrastructure as code . It is a de-facto standard today, especially with so much push towards cloud-based and serverless infrastructure. There are numerous tools helping with that and it could be quite daunting to choose the best one for your needs. In this post, I will look at some of the more popular options that I came around and describe which one might be a better tool for a given job. Unfortunately, there is no "perfect" one and all of them have pros and cons. Types of tools There are 2 main categories of how the resources are created: via API via CloudFormation The CloudFormation is the assembly of the AWS infrastructure. Whether you like it or not, it is pretty much guaranteed you'll have to deal with it at some stage. API provisioning is being used less and less due to the robust